Transition from the Parish Records to the Civil State register

With the birth of the Republic was the death of the Church. As so, the people felt that it was a new age. The Civil State Register was born, and the people were now required to register their births, marriages, and deaths with the mairie or Town Hall and no longer the parish; therefore referring to NMD or Naissance, Marriage, Décès.

As the church was set aside and separated from the governement, it seemed appropriate to abolish the Gregorian calendar, which is followed today, and begin anew with the year 1 on September 22, 1971, or the fall equinox. Twelve new months were created, and the endings of each season would end the same. The poetically chosen names would also represent the month by the rural life. As an example, Vendé(miaire), the first month beginning in September, was also the harvest season, or vendange.

Although the new calendar kept the four seasons and twelve months, each month was divided into 30 days and each week into 10 days, resulting into 3 week months. However, the plan resulted in a 360 day year calendar and evidently missed a few days to complete the lunar cycle. Therefore, 6 complementary days were added to complete the cycle.

This new calendar remained in use during 14 years. As January 1, 1806 came around, the Gregorian calendar was put back into place. However, the Etat Civil remained the primary place for registering the vital acts.

During the time period, the records were recorded with the dates according to the Republican Calendar. It is important to make the change back to the Gregorian Calendar for your own records, even if you keep the Republican date in the notes. Many calculators can be found online, such as this one:

Many converters from the French Republican calendar to the Gregorian calendar can be found online, such as this one.

No comments to show. 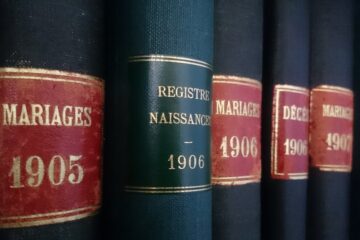 Civil registers- NMD The Civil Register, or Etat Civil contains the main vital records which are referred to as NMD, naissance, marriage, décès or Birth, Mariage and Death. The Civil Register begins in September 1792 Read more…

Transition from the Parish Records to the Civil State register